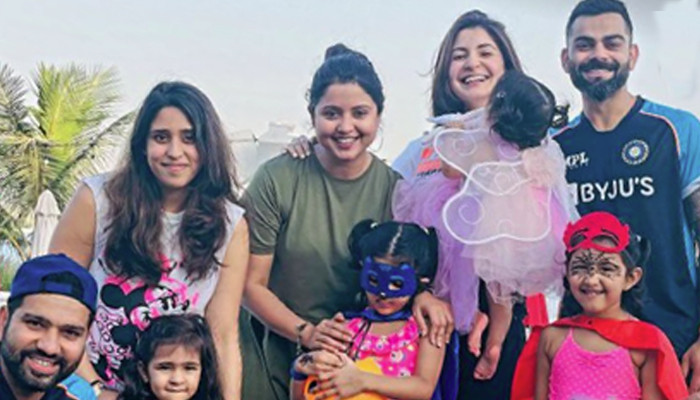 
Indian actor Anushka Sharma and her significant other, Indian skipper Virat Kohli, are in the United Arab Emirates as the latter is leading his team in the T20 World Cup. But being busy with the tournament doesn’t stop the star cricketer from enjoying fun-filled activities.

Taking the chance to relax ahead of a much-important game against New Zealand tomorrow (Sunday), Kohli and Sharma celebrated Halloween with the families of other cricketers.

The International Cricket Council has allowed the families of cricketers to accompany them during the T20 World Cup.

The players’ families are also part of the bio-secure bubble, hence their movements have also been restricted. However, the family members have been allowed to watch the match.

India have lost their first fixture of the Super 12s against Pakistan by 10 wickets, which was a historic match, as the Men In Green had for the first time defeated the Men In Blue in a World Cup fixture.

Next, India take on New Zealand in Dubai tomorrow, as they will seek to beat them in a bid to move forward in their pursuit of reaching the semis.