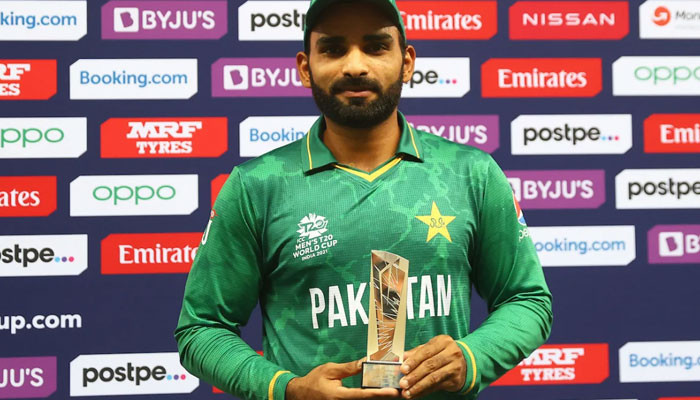 
Pakistani batter Asif Ali, who glided Pakistan to victory in the penultimate over against Afghanistan in the Super 12s of the ICC Twenty20 World Cup match played at the Dubai International Stadium on Friday, expressed his delight over the third consecutive win in a see-saw clash.

“Aur koi hukam Pakistan? [Is there any other order for me, Pakistan?],” said the power-hitter in a tweet after the match.

Asif Ali, who earned the love and appreciation from cricket fans, thanked the Pakistan Super League (PSL) franchise Islamabad United and everyone who reposed trust in him in his difficult time.

The winner of the ‘Player of the Match’ award concluded his tweet by saying #PakistanZindabad.

As he won the Player of the Match award, he said, “The boundary was small from this end so I told my partner I’d go for it this over. Thank God we pulled it off.”

“I look at the situation and plan in accordance with what it demands. [I see] which bowler has overs remaining, and the field setting,” he elaborated his strategy.

About his great batting performance, Asif Ali said, “I told Shoaib that Naveen was bowling well, and from this end, I could even score 25 in an over. So I planned for it.”

Several cricketers, famed personalities and a lot of cricket fans paid tribute to Asif Ali for turning tables on Afghanistan.

To his tweet, Asif reacted with an emoji and later in a video, he is found repeating the same words on a lighter note.

After Asif’s convincing batting show, skipper Babar Azam heaved a sigh of relief and thanked God. After lauding the other teammates for their performances, Babar Azam termed Asif’s show as “cherry on top”.

For Mohammad Hafeez, Asif Ali was “amazing” during the Afghanistan match.

Several politicians took to Twitter to express their emotions about the country’s third consecutive win and Asif’s major contribution for the victory.

After the victory against Afghanistan, a video of Australia’s former cricketer Dean Jones went viral. In the video, Dean Jones, who worked as head coach of Islamabad United in the Pakistan Super League (PSL), got emotional while remembering Asif Ali’s daughter.