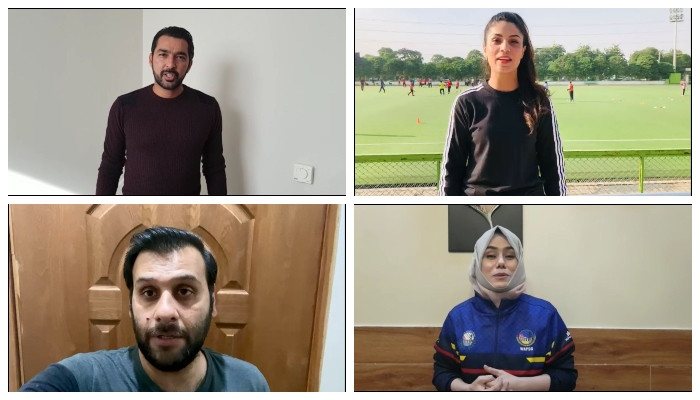 
Karachi: Cricket is widely considered a unifying factor in Pakistan and when the team is on mission World Cup, everyone gets eager about the sport and comes forward to support the Green Shirts.

Led by Babar Azam, the Pakistan Cricket Team has already arrived in the UAE for T20 World Cup with the aim to repeat the history of 2009. The team will start its mission on October 24 with a clash against India.

The team had its first training session on Sunday with the hope to keep Pakistan’s flag high in the mega event of 20 overs format. While the cricketers are working hard on the field, other athletes who have been sweating for Pakistan in various sports are also praying for the team Pakistan’s victory in the World Cup.

Athletes who have brought glory to Pakistan in hockey, tennis, karate, weightlifting, badminton, athletics, and other sports have wished the Pakistan team all the best in their World Cup mission.

Pakistan’s Karate Champion Kulsoom Hazara says she is excited for the T20 World Cup and will watch the entire event.

“I want them to repeat what they did in 2009 as everyone here is disappointed by what New Zealand did recently. So,  by winning the World Cup, the Pakistan team can bring smiles to cricket fans,” said Kulsoom, while adding that Babar Azam and Shoaib Malik are her favourite players.

Saadi Abbas, who won several medals for Pakistan in Karate, says that like the entire nation, he is also praying for the victory of the Pakistan team. He especially wished Babar Azam to lead the team in full swing and give the nation the gift of the World Cup by playing the best cricket.

Pakistan’s female hockey player Afshan Naureen also wished the Pakistan team all the best. She said that Mohammad Rizwan is her favourite player but insisted that she is supporting the entire team and praying that every player in the team performs well and makes Pakistan win the T20 World Cup.

Pakistan Hockey team goalkeeper Imran Butt reminded that the Pakistan cricket team has a lot of talent and the team can bring the trophy by performing very well in the World Cup.

“Mohammad Hafeez is my favourite player and I want him to perform well in this event as a senior player,” he said.

The hockey player, who joined the Pakistani contingent at the London Olympics, said that Babar Azam and Mohammad Rizwan are also brilliant players and he has high hopes from all of them.

“I hope that they beat India this time as well,” Imran said.

Tennis star Aisam-ul-Haq said that his best wishes are with the team.

“I am sure that all the players will play their best in the World Cup. I will not mention any single player as a favourite and will instead support the entire team. The cricket team is a sport, it is more important for the team to perform than individual performance, hopefully, Pakistan will perform well in this World Cup as a team,” the Tennis star said.

“I am friends with almost every player in the team but my favourite is Fakhar Zaman. However, I am supporting every single player in the squad,” he said.

Pakistan’s top female Javelin Thrower Fatima Hussain said that as the entire nation, she is also a cricket fan and wants the Pakistan team to perform well in the World Cup.

“Whenever and wherever Pakistan is playing, we all pray that the team and players perform well and that may the country’s flag be raised on top,” she added.

Tennis player Ushna Sohail also expressed her good wishes for the victory of the Pakistan team.

Pakistan Women’s Football Team player Fatima Ansari says that she is hopeful that the team will make Pakistan proud and bring the trophy home by performing well. The national women’s footballer said that the cricket team is a sport and that’s why it is important for every player to do well to ensure the team’s win.

Weightlifter Talha Talib, who became the centre of attention for his outstanding performance at the Tokyo Olympics, requested the entire nation to pray for the Pakistan team’s victory in the World Cup so that the Pakistan team is in the red in the mega event.

Badminton star Palwasha Bashir also wished the Pakistan team the best ahead of the mega event and said that she is confident that the team would make headlines by performing well in the World Cup.

“Every player in this team is an asset for Pakistan and everyone has their own set of skills. Hopefully, everyone will play their role well and make Pakistan win the World Cup and return home with glory,” the top badminton player concluded.

The Pakistani athletes were of the view that once a player enters the field wearing Pakistan’s jersey, he becomes an ambassador of Pakistan and it is everyone’s duty to support him and support the country.