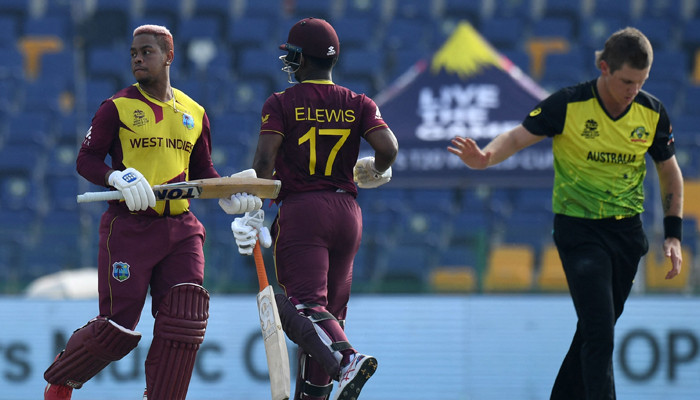 Australia opt to bowl against West Indies in key clash


ABU DHABI: Australia skipper Aaron Finch won the toss and elected to field against West Indies in their bid to make the semi-finals of the Twenty20 World Cup on Saturday.

The Aussies come in unchanged in Abu Dhabi from the eight-wicket rout of Bangladesh that made their run-rate go past South Africa as the two teams fight for a place in the final four from Group 1.

South Africa play England, who are all but through to the final four, in the evening match of the day and the result will decide the two semi-finalists from this group.

“It looks like a really good wicket and won’t change throughout the 40 overs, will try to do some early damage with the ball,” said Finch.

A win for Australia will boost their semi-final chances and Finch said, “We won’t think about it (net run-rate). We have come here to take two points.”

Two-time champions West Indies have failed to defend their title after they went down to Sri Lanka in the previous match.

Skipper Kieron Pollard admitted the game could be the last for a few stalwarts of the West Indies cricket — including the 42-year-old Chris Gayle.

“It is unfortunate that we couldn’t get that one last hurrah in terms of getting to the next phase of the tournament,” said Pollard.

“But today is another opportunity, it will be emotional for some but the important thing is to try and win the cricket game to salvage something.”

Dwayne Bravo, 38, has already announced his international retirement and the game would be his last.

“I have no regrets but want to finish my career on a high,” said Bravo.

West Indies have brought in Hayden Walsh Jr for Ravi Rampaul in the playing XI.