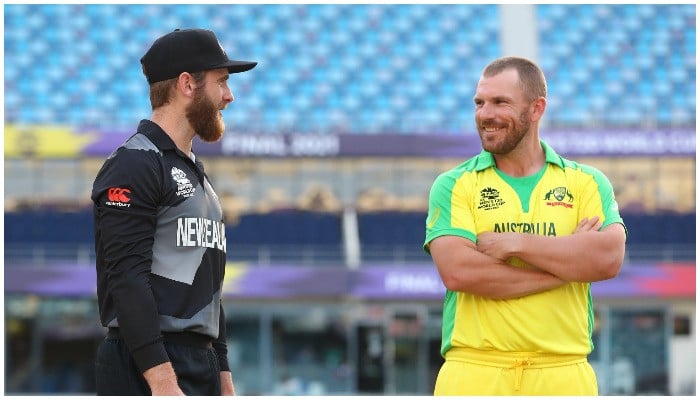 
Australia and New Zealand locked horns for the much-awaited Men’s T20 Final match today (Sunday), which is taking place in Dubai. Australia won the toss and decided to field first.

The two teams had played a match together only once before in the T20 World Cup history when New Zealand defeated Australia by 8 runs in India.

Neither Australia nor New Zealand have won the T20 tournament before, so whoever wins today will lift the T20 trophy for the very first time.

Displaying an impressive start, New Zealand opening batter Martin Guptill struck a four on the very second ball of the first over but lost their first wicket at 28 runs when Daryl Mitchell was sent back to the pavilion by Josh Hazlewood towards the end of the 3rd over.

New Zealand lost their second wicket in the 11th over after opening batter Martin Guptill was dismissed by Adam Zampa’s bowl after scoring 28 runs. By this time, the team had scored 76 runs.

Meanwhile, New Zealand captain Kane Williamson completed his half-century as the team scored a total of 108 runs in 14 overs.

By the end of the 16th over, New Zealand had scored 136 runs at the loss of 2 wickets. But in the very next over, Glenn Phillips and Williamson both were sent back to the pavilion by Hazlewood after scoring 18 and 85 runs, respectively.

At the end of the first innings, New Zealand handed over a 173 run target to Australia.

Aussie opening batters David Warner and skipper Aaron Finch started their team’s innings with a careful start while New Zealand only allowed the team to score one run in the first over.

By the end of the 4th over, Australia scored 39 runs at the loss of one wicket when skipper Finch was sent packing by Trent Boult.