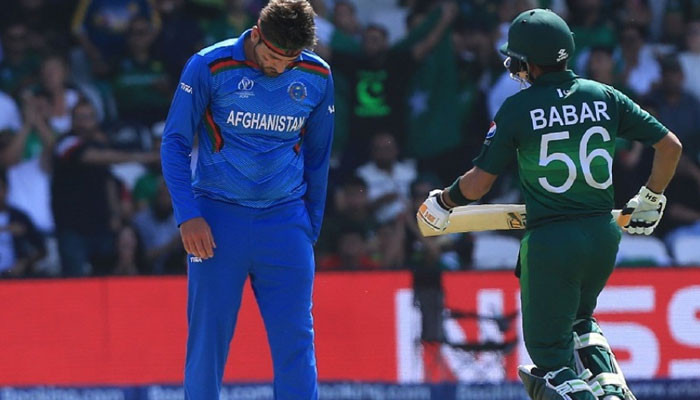 
The Pakistan cricket team will play their third match of the Super 12 stage in the ICC T20 World Cup against Afghanistan at the Dubai International Stadium today (Friday), as both teams, so far undefeated, eye to seal their berth in the semi-finals of the world’s biggest tournament.

A weekend capacity crowd is expected from amongst the huge expatriate population of both nations who live and work in the Gulf.

With two early wins, Pakistan’s chances of reaching the semi-finals are bright. However, given the conditions in the United Arab Emirates (UAE) and Afghanistan’s performances so far, Afghanistan is also considered a dangerous side.

Pakistan thrashed India well in the first match, beating the team by 10 wickets. They also easily defeated the Kiwis in their second match.

Afghanistan have emerged as a dangerous side in the tournament as in their warm-up match, they easily defeated defending champions West Indies. They also beat Scotland by a huge margin of 130 runs in the Group Two match.

In bowling, Rashid Khan and Mujeeb-ur-Rehman will give a tough time to the batsmen of the opposing team, while Hazratullah Zazai, Mohammad Shehzad and Asghar Afghan are in good form for batting performances.

The Green Shirts have also paved their way to reach the semi-finals with their convincing wins against India and New Zealand. Their bowlers and batsmen are both in good form. The morale of the players is high, but the Afghan team can no longer be called weak opponents. Whenever these two teams are face to face, an interesting match is a sure result.

The two teams played a thrilling match in World Cup 2019. Pakistan won it by three wickets.

The match between Pakistan and Afghanistan will be played at Dubai Cricket Stadium at 7pm today.

Rashid Khan calls on fans of Pakistan, Afghanistan to behave

Rashid Khan has pleaded with the fans of Afghanistan and Pakistan to behave when the two neighbours meet in the T20 World Cup today as he remembers a match in England two years ago that was left scarred by fighting and a pitch invasion.

Afghanistan’s star spinner Rashid played in that 50-over World Cup game at a packed Headingley in Leeds in 2019.

His side suffered an agonising defeat but the result was overshadowed by violence and scuffles inside and outside the stadium.

Players needed security escorts off the pitch as fans poured out of the terraces.

“It’s definitely always a good game against Pakistan, but this should remain a game,” Rashid said Thursday.

“I request all fans to stay cool and calm and just enjoy the game. What happened in the 2019 match should not have happened.”

Afghanistan smashed 11 sixes and 13 boundaries in their rout of Scotland in Sharjah. But Rashid said hitting aggressive shots is not the team’s only objective.

“To be honest, we don’t have that kind of mindset, like you have to focus on hitting so many sixes,” he said. “But you have to adjust yourself with the wicket,” he said.

“We know Afghanistan is a very good team but our plans are well-placed and we need to execute those plans as we have done in the first two games,” Mushtaq said, addressing a press conference in Dubai.

The interim coach further said that T20 is a game in which one should expect highs and lows.

He said it is not easy to score big on pitches, as one has to be technically strong while playing on such fields.

“Rashid and Mujeeb are quality spinners and have been doing well for their team as well as in the private leagues around the world, but we have plans against them,” said Mushtaq.

Speaking about changes in the batting order, he said: “The entire team is playing well. We are happy with this combination.”

“We are not thinking of removing Fakhar Zaman from one down. He played well in [the] warm-up matches.”

Mushtaq pointed out that Pakistan have played most of their cricket in recent years in the UAE.

“These conditions of the UAE are very familiar for my players and we have been playing home international matches and Pakistan Super League games here and that has, and will, help our players.”

Pakistan will play Namibia on November 2 and Scotland five days later in the Super 12 stage.