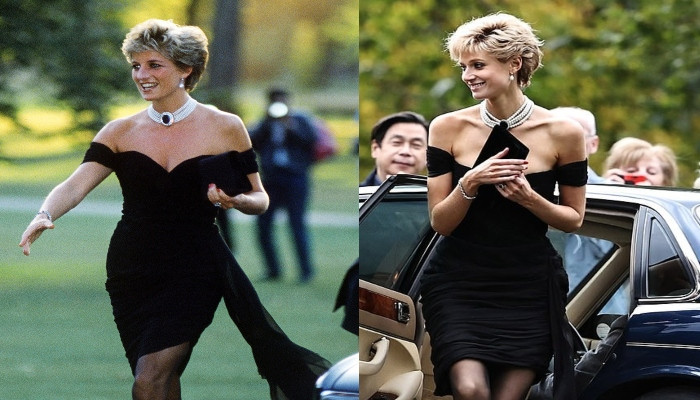 
Elizabeth Debicki was spotted recreating Princess Diana’s notorious ‘revenge dress’ on the set of The Crown.

Diana’s infamous ‘revenge dress’, with provocative off-the-shoulder look at the time, was widely interpreted as vengeance as came after Prince Charles publicly admitted to cheating on her.

New photographs of the Australian actress, 31, as Diana getting out of her car to attend the 1994 Vanity Fair dinner at the Serpentine Gallery in London startled the audience.

Elizabeth recreated almost an identical look of Diana as she shot for the Netflix drama ‘The Crown’ in a duplicate of the £900 Christina Stambolian silk crepe cocktail dress with a side sash.

It was the same day when Charles confessed to having an affair with Camilla Parker Bowles, now his wife in a TV documentary interview with Jonathan Dimbleby.

The actress, also donned a replica of the princess’s sapphire, diamond, and pearl necklace as the princess wore that night.

The Royal couple breakdown will be the main theme of the fifth series as Debicki was pictured filming the scenes on Monday at the gallery in Hyde Park, a stone’s throw from Kensington Palace.