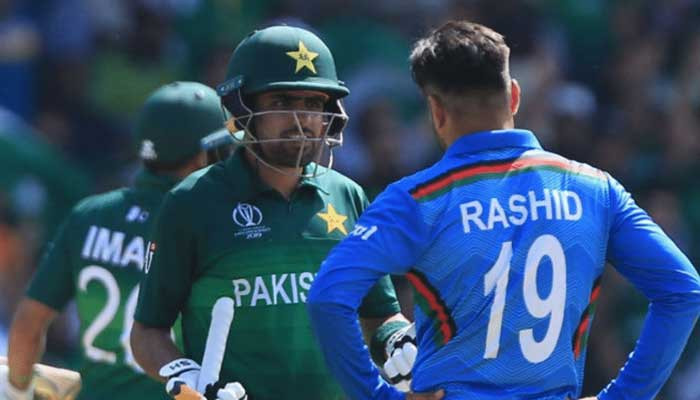 
Only a few hours remain when the first ball of the Pakistan-Afghanistan clash will be bowled, and fans can’t wait to see how Babar Azam tackles spin wizard Rashid Khan.

It will be an interesting battle, considering both players are young, extremely good at what they do, and will most likely give fans a chance to witness a contest between them.

Babar Azam and Rashid Khan are both also in good form, with the former scoring an impressive half-century in the first match against India while the latter picked up four important wickets against Scotland.

The Pakistani skipper is ranked at number 2 in the ICC T20 rankings while Rashid Khan is ranked at the number 3 spot in the bowlers’ rankings.

Fans were also quick to point out how neither Babar Azam nor Rashid Khan had lost a T20I in the UAE before.

Danial tweeted that he would be among the lucky ones to witness Babar Azam live from the stands. He also wished good luck to Afghanistan, saying he was also eager to watch Rashid Khan in action.

A Twitter account named HM had some advice for interim head coach Saqlain Mushtaq and Pakistan captain Babar Azam: Don’t be overawed by the Afghan spinner.

Rashid Khan calls on fans of Pakistan, Afghanistan to behave

A day earlier, Afghanistan spinner Rashid Khan had pleaded with the fans of Afghanistan and Pakistan to behave when the two neighbours meet in the T20 World Cup today, as he recalled the clashes that took place between fans in England two years ago.

Afghanistan’s star spinner Rashid played in that 50-over World Cup game at a packed Headingley in Leeds in 2019.

His side suffered defeat at the hands of Pakistan but the result was overshadowed by violence and scuffles inside and outside the stadium.

Players needed security escorts off the pitch as fans poured out of the terraces.

“It’s definitely always a good game against Pakistan, but this should remain a game,” Rashid said Thursday.

“I request all fans to stay cool and calm and just enjoy the game. What happened in the 2019 match should not have happened.”

Afghanistan smashed 11 sixes and 13 boundaries in their rout of Scotland in Sharjah. But Rashid said hitting aggressive shots is not the team’s only objective.

“To be honest, we don’t have that kind of mindset, like you have to focus on hitting so many sixes,” he said. “But you have to adjust yourself with the wicket,” he said.