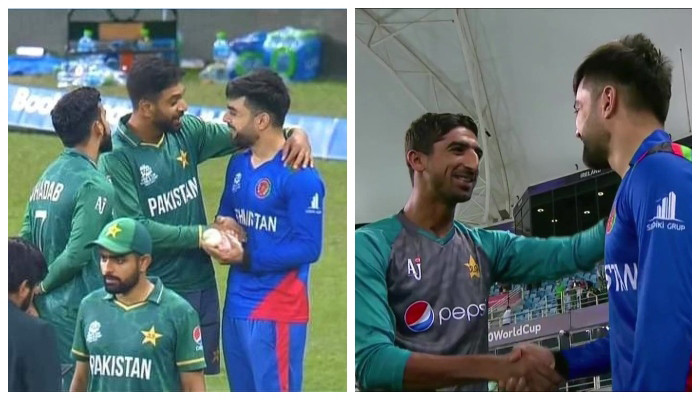 
Fans were mesmerised as the players from Pakistan and Afghanistan bucked each other up after their T20 World Cup match, which the Men In Green won by five wickets in the second-last over.

Asif Ali smashed four sixes in the penultimate over to help Pakistan achieve a hard-fought five-wicket win over Afghanistan in Dubai on Friday.

Asif finished with 25 off just seven balls with four sixes and a single, leaving Janat and all the other Afghan players frustrated.

But even after the enthralling match, players from the sides exchanged kind words and there was no tension between the squads, as they bucked each other up.

Cricket fans were more than pleased to witness the “beauty of cricket”, and they expressed their cheerfulness on Twitter.

‘Picture of the day’

Picture worth a thousand words

‘Why can’t everyone in Pakistan be as decent?’

Afghanistan scored a fighting 147-6 in their 20 overs with Gulbadin Naib and skipper Mohammad Nabi each scoring 35.

Babar anchored Pakistan’s innings with a 47-ball 51 but his dismissal — bowled by spinner Rashid Khan — turned the game on its head in the 17th over with Pakistan needing 26 off the last three overs.

Paceman Naveen-ul-Haq conceded just two runs in the 18th over and dismissed Shoaib Malik for 19 but Asif quashed all hopes of an Afghanistan win.

Pakistan´s task was to handle spinners Rashid and Mujeeb Ur Rahman in their chase with the evening dew making life tough for bowlers.