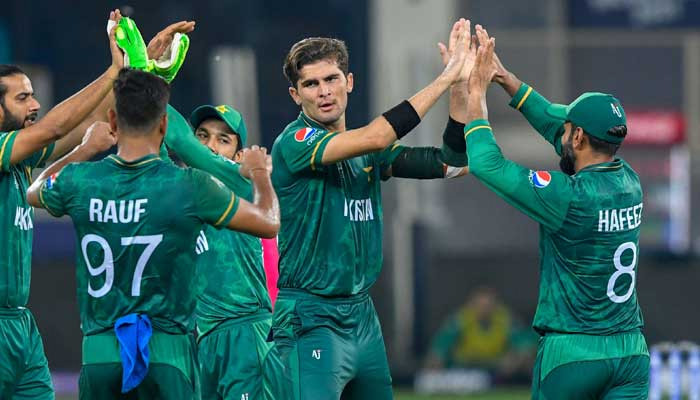 
After notching up three successive wins against India, New Zealand and Afghanistan, Pakistan is on the brink of qualifying for the semi-finals and is aiming to seal the spot with a win against Namibia in Abu Dhabi tonight (Tuesday).

Pakistan and Namibia will face each other for the first time in T20Is. Namibia will face their sternest test yet against Pakistan, who have been unstoppable so far in the Super 12 of the ICC Men’s T20 World Cup 2021.

Unbeaten in the T20 World Cup so far, Pakistan have gone from dark horses for the tournament to one of the strong favourites in just three games.

While bowling has historically been Pakistan’s strong suit, the team’s batting, led from the front by captain Babar Azam, has bailed them out of trouble twice in the last two games.

Namibia, on the other hand, come into this game on the back of their first loss in the Super 12 to Afghanistan. While it was expected that the Eagles would find it difficult to deal with the spinners in Afghanistan’s ranks, Namibia were done by the pacers who claimed seven of the nine wickets that fell.

As such, Namibia will have their task cut out facing the dangerous pace bowling trio of Shaheen Afridi, Haris Rauf and Hasan Ali, who have accounted for 14 of the 21 wickets Pakistan have claimed so far. The spinners, too, have played their roles to perfection, giving little respite to opposition batters between overs of searing pace.

If the Namibian batters are to hold their own against Pakistan, they will be banking on their “Bomb Squad”, consisting of captain Gerhard Erasmus, David Wiese and JJ Smit, to make a collective impact.

Pakistan is unlikely to tinker with the combination that has won them games against India, New Zealand and Afghanistan and put them on top of Group 2.

Meanwhile, Namibia are unlikely to make wholesale changes despite the loss against Afghanistan, but could look to strengthen their batting order by bringing back Stephen Baard in place of Pikky Ya France, who has gone wicket-less in the tournament so far.

Considering he is the only southpaw in Pakistan’s top six, Fakhar Zaman will have a very important role to play in neutralising Namibia’s left-arm heavy attack.

He struggled against New Zealand, taking 17 balls to get to 11, but found some sort of rhythm against Afghanistan with a 25-ball 30. After their opening game against India, Pakistan’s openers haven’t quite clicked in the previous two games.

If there comes a situation where Zaman is out to bat early, Pakistan will hope he can dominate the Namibian bowling attack.

David Wiese was the lone warrior with the bat for Namibia in their 62-run defeat to Afghanistan on Sunday. Even as the rest of the batting order struggled to deal with the spin and pace, Wiese soldiered on, being the only batter to go past the 20-run mark.

Though his innings only delayed the inevitable, Namibia will be hoping their leading run-scorer in the tournament so far can lead the way against a strong Pakistan bowling attack.

If Namibia have to challenge the in-form Pakistan team, Wiese has to continue his recent form. He has scored 142 runs and chipped in with four wickets in five matches played in the T20 World Cup so far. His wealth of experience (272 T20 matches) in the format certainly makes him a must-have player in the fantasy team.

Pakistan can virtually seal a spot in the semi-finals with a win over Namibia. The Eagles, meanwhile, will be looking to pull off an upset and keep in touch with the four spots, with games against New Zealand and India still remaining.

What the captains said

Meanwhile, Namibia captain Gerhard Erasmus was honest in his assessment after the loss against Afghanistan. He said, “We are aware of the challenges. We need to make use of this level. This is a stepping stone for the future.”