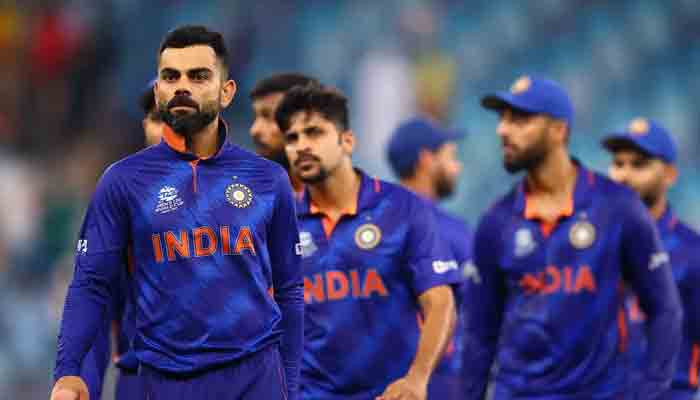 How bright are India’s chances of qualifying for semi-finals?


After India thrashed Scotland and chased their meagre 86-run target in less than seven overs Friday night, the question on everyone’s minds is: can the Indian cricket team still qualify for the semi-finals?

After two demoralising losses to Pakistan and New Zealand in their opening two matches of the Men’s T20 World Cup, India bounced back by thumping Afghanistan and Scotland.

Their victory against Scotland, coming in less than seven overs, have propelled the Men in Blue to the third spot in the group on the NRR (Net Run Rate) basis.

Despite being in the best possible position they can be after losing their first two matches, Virat Kohli and Co’s fate is not in their hands.

“After a crushing defeat at the hands of New Zealand in the second game, India’s net run rate was a lowly -1.609,” reads a post on the ICC’s website.

“However, after two back-to-back wins by massive margins – first against Afghanistan by 66 runs and now against Scotland with 81 balls remaining – India’s net run rate is now at +1.619, the highest amongst all the Group 2 teams.

India’s semi-final hopes will rest on Sunday’s Afghanistan-New Zealand clash. It’s really simple for India: if Afghanistan wins the match, India has a chance to qualify for the semi-finals.

The Black Caps, unlike India, have six points, and are placed on number two in the group after Pakistan and have their fate in their own hands. This means that a victory over Afghanistan Sunday will ensure they are through to the semi-final stages of the T20 World Cup.

Quite simply, a victory for New Zealand is the worst possible result for India.

Scenario in an Afghanistan win

Afghanistan will be supported by one billion fans in India when they take the ground against New Zealand Sunday. A win for Afghanistan will mean India’s hopes will remain alive for the rest of the tournament.

However, if the Nabi-led team does end up beating New Zealand by a handsome margin, it can make them strong contenders for the semi-final stages of the T20 World Cup as well.

Afghanistan will then place their hopes on Namibia pulling an upset over India in their Super 12 stage clash.

If Afghanistan beat New Zealand, India will have to keep the NRR in mind when they face Namibia.