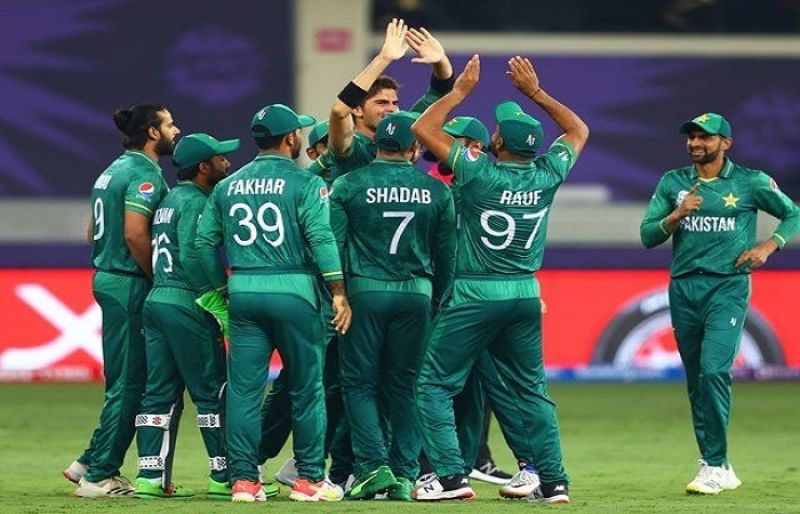 
After struggling against the Black Caps, Asif Ali hit two pressure-relieving sixes to give the Men in Green the upper hand against New Zealand Tuesday.

Babar and Rizwan carefully started Pakistan’s innings. However, the Pakistani skipper was bowled out by Tim Southee, as New Zealand drawing first blood.

Fakhar Zaman, after scoring a six, was trapped lbw. Hafeez showed some promise, hitting a six as well a few overs later. However, he was dismissed off a superb catch from Conway off Santner’s delivery.

New Zealand started their innings against Pakistan cautiously, but ended up losing four wickets to Pakistan before hitting three figures.

Martin Guptill, Daryll Mitchell and Jimmy Neesham headed to the pavilion after being dismissed by Haris Rauf, Imad Wasim and Mohammad Hafeez respectively.

Earlier, the Kiwis made a cautious start by holding off Shaheen Afridi and Imad Wasim, as both Pakistani bowlers kept their line and length.

However, a blistering delivery by Haris Rauf caught Martin Guptill unawares, and shattered his stumps.

Pakistan earlier won the toss and have elected to field first against New Zealand as the green shirts lock horns with the Black Caps today.

“We are going to bowl first,” said skipper Babar Azam at the toss. “We will take early wickets and put pressure on them. The second reason is the dew factor [so the team may want to capitalise on it],” he said.

Speaking about the India win, Babar Azam said a victory always gives the team confidence, especially if it is the first one.

“There is always room for improvement so we will try to be consistent,” he said, adding that he has made no changes to the playing XI.

New Zealand skipper Kane Williamson said he would like his team to adopt to the circumstances in Sharjah.

New Zealand will be kick-starting their ICC T20 World Cup campaign today against the green shirts, who began their journey with a record-breaking win against India.

On the ICC Men’s T20 team rankings, Pakistan is placed third, while New Zealand is on fourth position. Pakistan holds a historical edge over the Kiwis in the format though, having won 14 and lost 10 contests between the sides. The last series between the two countries, in December 2020, was won by New Zealand.

The two sides were supposed to play another series in Pakistan as part of their preparation for the T20 World Cup, but the Kiwis abruptly cancelled the hotly-anticipated series minutes before the scheduled start of the ODI series in Rawalpindi, citing security threats.

“Walking out of the tour by taking a unilateral approach on a security threat is very frustrating,” PCB chief Ramiz Raja had said.