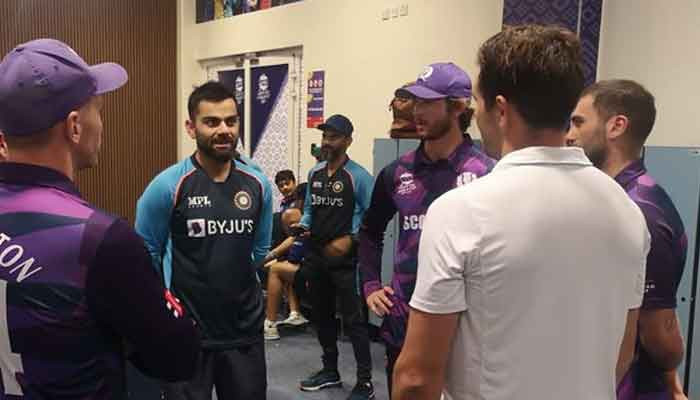 
Indian captain Virat Kohli and a few members of the cricket team followed in the footsteps of their Pakistani counterparts by paying a visit to the Scotland cricket team’s dressing room after their T20 World Cup clash Friday night.

A couple of players of the Pakistan cricket team, including the team’s manager Mansoor Rana, Shaheen Afridi, Hassan Ali and Mohammad Hafeez (among others) paid a visit to Namibia’s dressing room to encourage them for playing impressive cricket in the T20 World Cup.

Virat Kohli and Co. did the same Friday night, as Cricket Scotland tweeted pictures of the Indian captain speaking to a bunch of Scot cricketers in the dressing room.

In one of the pictures, India’s opening batsman KL Rahul can also be spotted. Rohit Sharma and Jasprit Bumrah also accompanied the Indian captain to the Scottish dressing room to chat with the players.

“Huge respect to Kohli and co. for taking the time,” tweeted Cricket Scotland.

They posted a witty caption to go along with the next tweet, and picture.

Scotland, who are already out of the tournament, will be facing table-toppers Pakistan in their last Super 12 game at Sharjah on Sunday.

In a statement last week, Scotland captain Coetzer had said it would be great if Kohli would chat with his players in their dressing room and share their wisdom , adding that the Indian team are “excellent ambassadors of the game.”

“We want our guys to speak to them, be it Kohli or Williamson or Rashid Khan. That is the only and best way to learn. We used to be able to do it in the pubs before, but now we cannot,” he had said.

“The squad will learn from every experience. To get to play against the likes of India, Pakistan, New Zealand and Bangladesh is just brilliant. It is a good experience playing against the best at the top level. The guys will come away with a lot more life experiences, not just cricket experiences. We are ranked 12th in the world and while some people may talk about the gulf, but I believe it is a good achievement.”

Earlier this week, the Pakistan cricket team paid a surprise post-match visit to Namibia’s dressing room to congratulate and encourage them for qualifying for the T20 World Cup and playing good cricket.

The interaction happened shortly after the Pakistan vs Namibia Super 12 clash in Abu Dhabi, which had ended in a Pakistan victory.

The official Twitter handle of the Pakistan Cricket Board (PCB) posted a video of the Pakistani cricketers and a team official visiting the Namibian team’s dressing room to applaud their undaunted competitiveness.

The players of the two teams had exchanged smiles and words of encouragement. The warmest interaction seemed to be between Shaheen Afridi and Namibian all-rounder David Wiese, who had hugged, shared some jokes and wished each other good luck.

Afridi and Wiese both play together for the Lahore Qalandars in the Pakistan Super League.