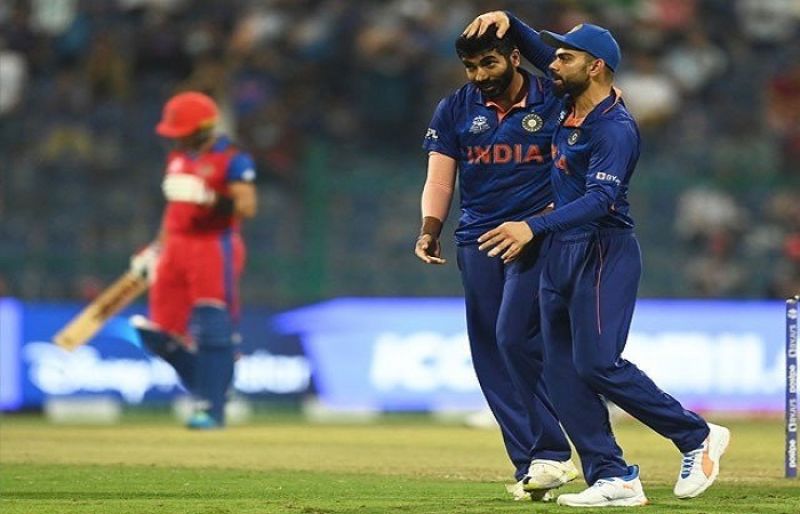 
Early wickets by Bumrah and Shami have seemed to put Afghanistan under pressure as they attempt to chase India’s mammoth 211-run target in the T20 World Cup fixture in Abu Dhabi Wednesday.

Earlier, Rohit Sharma and KL Rahul hammered half-centuries to guide India to a towering 210 for two in a must-win Twenty20 World Cup match against Afghanistan on Wednesday.

Sharma (74) and Rahul (69) put on an opening partnership of 140 to lay the foundation for the tournament´s highest total so far in the Super 12 match in Abu Dhabi.

Afghanistan had posted 190-4 in their opening win against Scotland.

Sharma took five balls to get going with a boundary off skipper Mohammad Nabi and then tore into the bowling attack.

India raced to 53 in the first six overs of powerplay to signal their intent in a competition where they need to win all three remaining matches to have any chance of making the semi-finals.

Rohit reached his fifty with a boundary off fast bowler Naveen-ul-Haq and then hit a six to bring up the 100 for the opening stand.

Sharma, who had scores of zero and 14 in India´s two losses, smashed the bowlers all around the park for eight fours and three sixes in his 47-ball knock before losing his wicket to Karim Janat.

Rahul soon followed his partner to the dugout after being bowled by Gulbadin Naib on a slower yorker.

Wicketkeeper-batsman Rishabh Pant and Hardik Pandya rode the momentum to smash the bowlers as they put on unbeaten partnership of 63.

Pandya, who hit 35, the left-handed Pant, who made 27, hit five sixes between them in a total domination by the Indian batting.

For pre-tournament favourites India, nothing has gone to plan so far in the T20 World Cup. They lost two tosses, their batting failed twice, their bowlers have taken only two wickets so far, and they find themselves second-last on the Group 2 table with no points from two games.

They can mathematically still finish in the top two of the group and make it to the semi-final. But the first step of that involves winning well against Afghanistan.

The Afghans aren’t going to make things easy, of course. They are an in-form team, with an excellent net run rate after big wins against Scotland and Namibia, and gave Pakistan some nervous moments as well. Their spin attack is world class, and will be the main threat to an Indian batting line-up that has struggled to get going against spinners.

They have also adopted an aggressive batting strategy – in contrast to India’s more conservative approach – and it has worked well for them so far. With the pressure on India, they may take the chance to play with further freedom.

Pakistan have already reached the last four from Group 1 leaving New Zealand, Afghanistan and India to fight for the last qualifying spot.