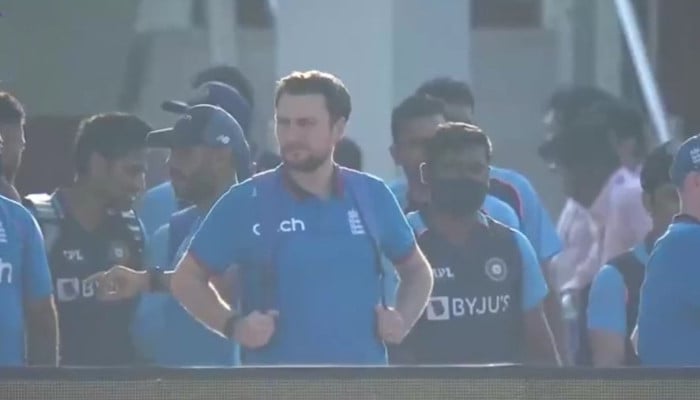 
DUBAI: The Indian cricket team arrived for their match against England at the Dubai cricket stadium, but before they could begin their fixture, the squad witnessed some exemplary batting from Pakistan’s skipper Babar Azam.

The Pakistani captain, who ranks as the best ODI batsman, scored an impressive half-century with the help of six 4s and a six, as he helped his team beat West Indies.

Pakistan had defeated West Indies by seven wickets through an all-out team effort in their warm-up match.

The Pakistani bowlers also put up a strong show against an aggressive West Indian side. The Windies never looked comfortable batting first, losing wickets at regular intervals and only managing to finish their inning at 130/7 from their 20 overs.

Meanwhile, as Babar was batting, the Indian side looked on as they got a taste of what they will face during the high-octane October 24 clash against Pakistan.

Jumping on the bandwagon, social media users also got the fun out of it, as they said “fans from India were enjoying” Babar’s batting.

Here’s how they reacted:

Anmol Farya, obviously impatient for the Asian cricket giants to lock horns on Sunday, loved the sight of the Indian cricket team watching from the stands as Babar Azam effortlessly stroked the ball to the fence every now and then.

“Indian cricket players have arrived in stadium while Pakistani players are in the middle. That 24th October’s feeling is already here,” she tweeted.