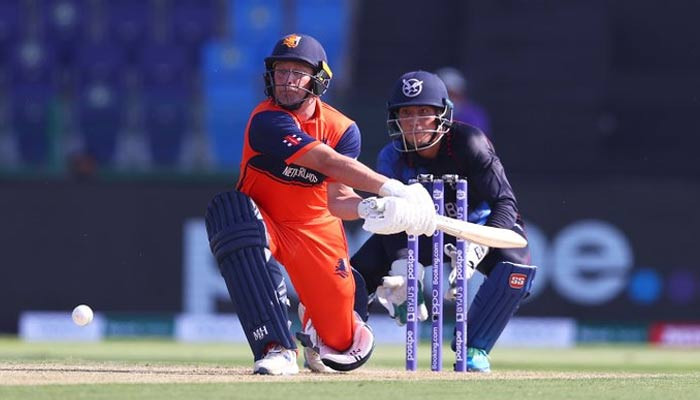 
ABU DHABI: David Wiese bludgeoned an unbeaten 66 as Namibia stayed alive at the T20 World Cup on Wednesday with a six-wicket triumph over the Netherlands.

In a sweltering Abu Dhabi, where temperatures soared to 36 degrees, former South Africa international Wiese hit five sixes and four boundaries as Namibia chased down their target of 165 with six balls to spare.

It was Namibia’s first-ever win at the World Cup and kept alive their hopes of making the Super 12 stage.

In their opening game on Monday, they had crashed to 96 all out and lost by seven wickets to 2014 champions Sri Lanka.

Defeat almost certainly means the Dutch, who lost their opener to Ireland, also by seven wickets, will be eliminated.

Even a win over Sri Lanka in their concluding Group A game on Friday may not be enough.

Wiese, the 36-year-old all-rounder who played for his native South Africa in the 2016 T20 World Cup, set Namibia on their way with a half-century off 29 balls.

He was well-supported by captain Gerhard Erasmus who contributed 32 off 22 balls with the pair putting on 93 for the fourth wicket.

Earlier, opener Max O’Dowd made a second successive half-century to lead the Netherlands to 164-4 after being put in to bat.

The New Zealand-born O’Dowd batted for virtually the entire innings, making 70 off 56 balls with one six and six boundaries.

He was eventually run out off the third ball of the final over after a knock which followed on from his 51 in his side’s opening loss to Ireland.

Colin Ackermann also played a solid role with the bat as the South African hit 35 off 32 balls.

Scott Edwards added a quickfire, unbeaten 21 from 11 balls to give the Dutch innings added extra impetus.