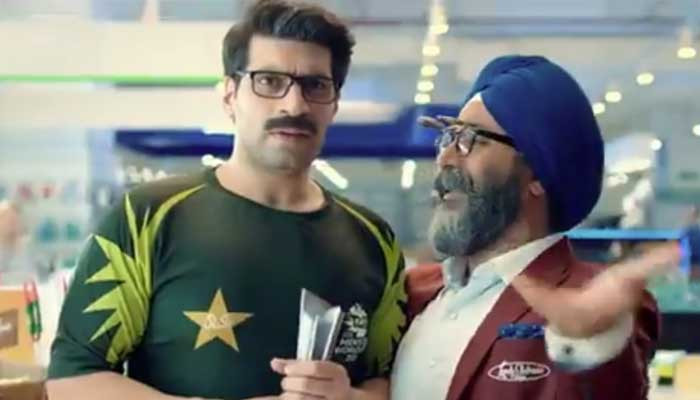 
The iconic campaign Mauka Mauka launched in 2015 by an Indian channel has once again returned, taking a dig at Pakistan again as the two sides clash on October 24 in the ICC T20 World Cup.

Launched initially six years ago, the campaign takes digs at Pakistan through the lens of an enthusiastic Pakistani cricket fan. All the fan wants to do, as per the campaign, is to witness Pakistan triumph over India in a World Cup clash.

However, the advertisement always ends with the fan getting disappointed and the repeated mention of Pakistan losing every World Cup encounter against India.

In the latest TV advertisement, the Pakistani fan walks into an electronic store owned by an Indian friend of his to buy a large TV set.

The electronic shop owner then tells his Pakistani friend to take home two TV sets instead of one. Puzzled, he asks why.

“T20 World Cup may ap ham se paancho baar haare hain (Your team has lost to ours five times in the World Cup),” he responds. “Ab patakhe toh phodne se rahay. Kuch toh phodoge? (Forget the firecrackers. You will need to smash something, right?)” he says.

“Buy one, break one free,” he says to the disappointed Pakistani fan.

The campaign has garnered a lot of attention over the years, both in India and Pakistan, with fans of both countries always reacting to its content.

After Pakistan trounced India in the Champions Trophy final in 2017, then captain Sarfaraz Ahmed joined a sea of fans outside his Karachi residence, trophy in hand, singing the Mauka Mauka song.

Babar confident of victory against India

Pakistan captain Babar Azam is confident of beating India and winning the ICC Men’s T20 World Cup as he said the Men In Green were focusing on what’s to come and not their past performance.

Speaking during a virtual press conference a couple of days ago, the skipper had said Pakistan would beat Pakistan and carry on the momentum throughout the tournament to win the World Cup.

“There is pressure [on the team] during mega-events, but there is added pressure during matches against India,” the skipper had told reporters during the press conference.

Azam had said Pakistan practised for the World Cup with complete focus and that the team would go into the tournament prepared.

Pakistan will play warm-up matches against West Indies and South Africa before beginning their campaign with a blockbuster clash with arch-rivals India on October 24 in Dubai.