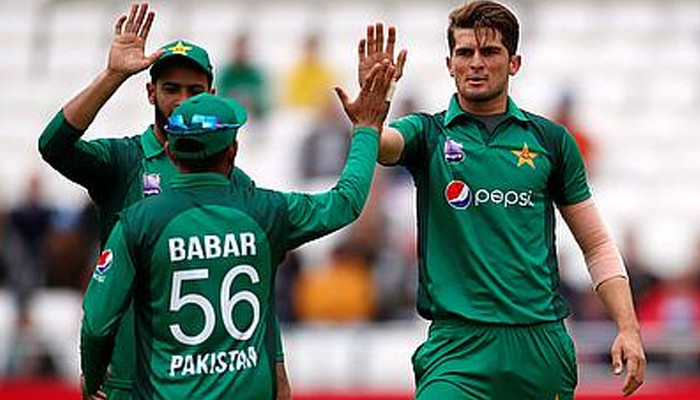 
The Pakistan team management has decided to include senior and experienced cricketers in the playing XI for much of the T20 World Cup, including the blockbuster India clash scheduled to take place on October 24.

“Pakistan has decided to go with a combination of senior and experienced cricketers in the clash against India,” a source told Geo News Tuesday.

“Unless fitness issues creep up, the same combination that is playing in the warm-up matches will be seen in action against India,” the sources added.

Among the bowlers, Shaheen Shah Afridi, Hassan Ali and Haris Rauf are likely to be included in the playing XI, the sources revealed.

As far as the all-rounders are concerned, Shadab Khan and Imad Wasim are being favoured by the team management to be included in the playing XI.

The team management is also considering the importance of the dew factor in matches that are played at night.

Pakistan’s match against India will be played at 7pm on Sunday, October 24. The Shaheens will partake in a training session today.

Pakistan coasted to a seven-wicket victory over the West Indies Monday when the two sides met for a warm-up fixture.

Pakistani upper order batsmen Fakhar Zaman and Babar Azam were impressive with the bat, scoring 46 and 50, respectively, while the Pakistani bowlers also picked up timely wickets to restrict West Indies to 130.

West Indies had won the toss and elected to bat first against Pakistan in the first warm-up match between the two sides.

West Indies’ Ravi Rampaul had sent Mohammad Rizwan packing early at 13, while Hayden Walsh had taken the wicket of Babar (50), and Mohammad Hafeez — who went for a duck.

Pakistani bowlers put up a strong showing against an aggressive West Indian side. The Windies never looked comfortable batting first, losing wickets at regular intervals and only managing to finish their inning at 130/7 from their 20 overs.