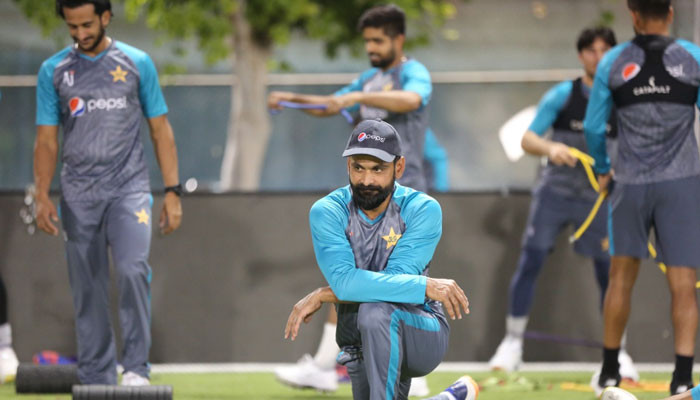 
Two days before Pakistan locks horns with India in the highly anticipated clash between the Asian cricketing giants on Sunday, the national team’s practice session for Thursday got cancelled.

The Pakistan Cricket Board (PCB) did not elaborate why the practice session got suspended.

Earlier on Wednesday, South Africa’s impressive batting helped them defeat Pakistan by six wickets in a thrilling warm-up match at the Tolerance Oval in Abu Dhabi.

Pakistani bowlers took early wickets of the Proteas openers however, they could not cut short the South African charge led by Rassie van der Dussen, who smashed 101 runs.

Temba Bavuma also did not miss any opportunity to make good use of his bat as he scored 46 off 42 balls. The last over by all-rounder Hassan Ali proved costlier as he conceded 22 runs. The pileup turned out to be too high for Pakistan to surmount that led Proteas to victory.

Right-arm pacer Haris Rauf, who gave away 33 runs from his three overs, could not pick up a wicket. Shaheen Afridi, who sent two batsmen to the pavilion – Bavuma and Heinrich Klaasen – gave away 30 runs from his four overs.

Rather successful was left-arm bowler Imad Wasim, who handed 19 runs from his three overs and targeted the wickets of Quinton de Kock (6) and Reeza Hendricks (7) in the same over.

Playing in the first innings, Pakistan set a 187-run target to South Africa with skipper Babar Azam and Mohammad Rizwan scoring 15 and 19 respectively. Clean bowled by Kagiso Rabada, Babar Azam returned to the pavilion during the power play. Fakhar Zaman’s batting was the highlight of Pakistan’s batting as he hit 52 off 28 balls with Asif Ali adding 32 runs to the total.

Pakistan had thrashed West Indies earlier this week with a seven-wicket victory in a warm-up match. India, England, Afghanistan and South Africa all won their second set of warm-up games.

On October 24, India will head into their match against Pakistan with a boosted morale as the Kohli-led squad has convincingly defeated both England and Australia in their warm-up fixtures.

In an earlier training session, Pakistani cricketers practised batting and bowling under the floodlights during the nets session. Pictures from the training session, shared by the Pakistan Cricket Board (PCB) showed the players seeking guidance from Vernon Philander and Matthew Hayden.