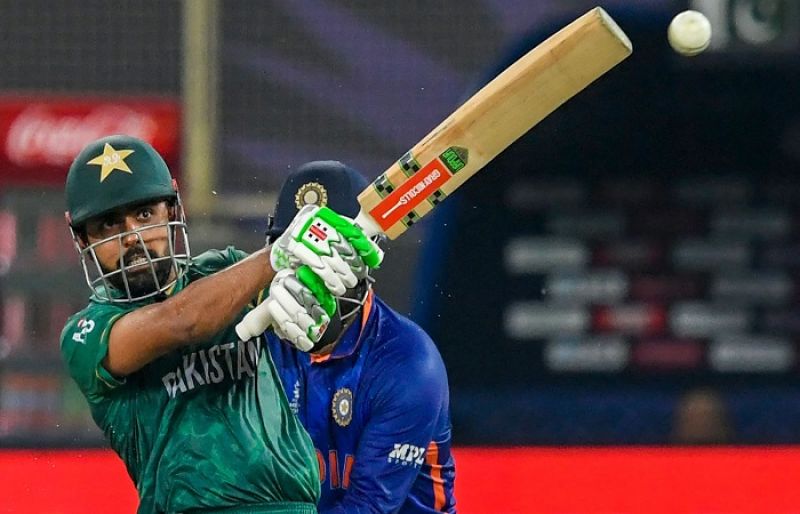 Proud to have made history, says Babar Azam after T20 win against India


Pakistan skipper Babar Azam on Monday said he and his players were “proud” to have made history by beating India for the first time in a World Cup match.

Pakistan humiliated their arch-rivals, romping to a ten-wicket victory in the Twenty20 World Cup in Dubai on Sunday, sparking starkly contrasting reactions.

The win was Pakistan’s first in 13 World Cup matches (seven in the 50 over World Cup and six in the Twenty20 World Cup) dating back to 1992 in Australia.

“It is definitely a proud moment for me as well as for all my players that we have made history,” Babar told AFP in an exclusive interview.

Lanky paceman Shaheen Shah Afridi put India on the back foot from the start with the wickets of openers Rohit Sharma and KL Rahul off his first seven deliveries.

Babar along with fellow opener Mohammad Rizwan knocked off the target in 17.5 overs without losing a single wicket.

Babar hit 68 not out while Rizwan finished with an undefeated 79.

“We realise how important and how much needed that win is as everyone wanted us to win and to have made history is one of the defining moments in our careers,” Babar said.

“I had said before the match that records are meant to be broken so we have broken that jinx and we are very happy, in fact the whole country is happy and celebrating.” Babar said the ‘special’ match was as usual of high intensity.

“All of us know that when Pakistan plays India there is very high intensity and it’s a pressure game,” he said. “The whole world waits for this match, so it is a special match.”

Babar admitted the noise in the stadium made his task of arranging his fielders tough.

“The stadium was nearly packed,” said Babar of the Dubai stadium where a 70 per cent crowd was allowed in under relaxed Covid-19 restrictions.

“There was so much noise in the stadium that I found it tough to call my players, I told them to keep looking at me so that I can move the fielders in between overs.

“We have gelled well over the years so we are used to that. The response from the players was extraordinary. We got a head start in bowling when Shaheen got us wickets and then we batted as per our plan.”

This was Pakistan’s first ten wicket win in all Twenty20 internationals and the first defeat by this margin for India.

Babar said he had been part of two defeats against India, in the Junior World Cup in Australia in 2012 as skipper and then at the 2019 World Cup in England.

“I remember that we lost to India in the quarter finals of the Junior World Cup in 2012 so it was a much desired thing to beat India,” he said.

Babar said his team prepared well ahead of the tournament, despite New Zealand abandoning a tour due to a security alert last month without playing any of the eight limited over games scheduled.

England followed suit in withdrawing its men’s and women’s teams from touring ahead of the Twenty20 World Cup.

“We prepared well in the National Twenty20 in Pakistan,” Babar said. “Our plan was to keep things simple and through that we effected that turn around.”

Pakistan next plays New Zealand in Sharjah on Tuesday.

The third spot on the current ranking is also occupied by Pakistan, with Kamran Akmal and Salman Butt scoring 142 runs against Bangladesh in 2010.

“It was a partnership of the absolute highest quality, coming in both players’ T20 World Cup debuts, with neither having made the Pakistan squad five years ago,” the report said.

In addition, Babar and Rizwan’s 152 is the second-biggest partnership for any wicket in men’s T20 World Cup history, 14 runs shy of Kumar Sangakkara and Mahela Jayawardene’s 166 against West Indies in 2010, the report said.

The partnership is also the biggest for any wicket in a T20I against India, it added.