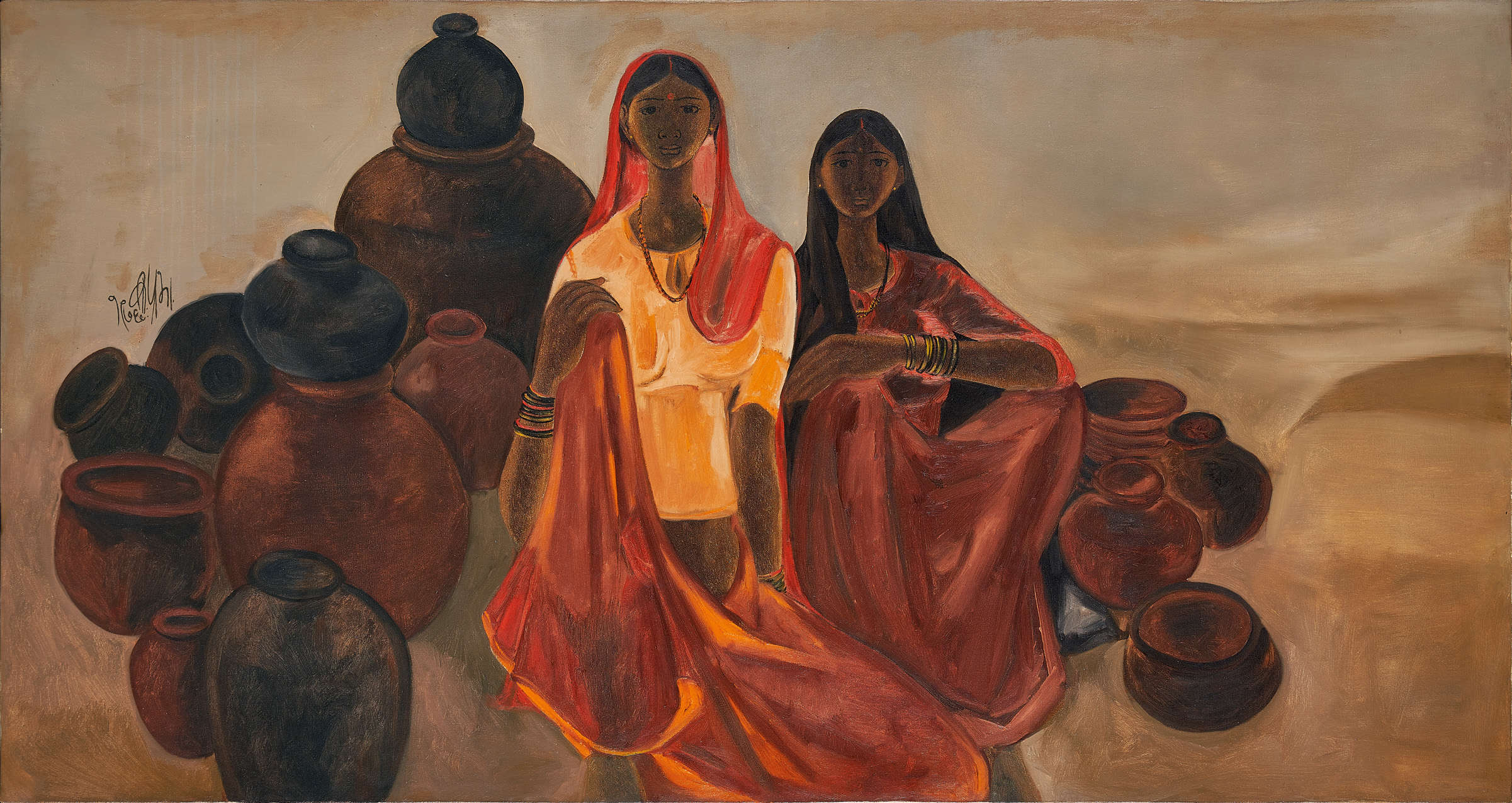 
“It is my aim to paint the trauma and tragedy of women.”

Think portraits of rural Indian women who stand amidst a landscape of light and expanses, caught in the throes of poverty, drought and hunger. Paint her with a single dominant colour sometimes against the waves of the sea, sometimes on a beach, and sometimes in a desert amidst the sands. This is the rural idyll of B Prabha. One collector, gallerist  in Delhi who collected B Prabha was Virendra Kumar of Kumar gallery.

At Pundole’s, there are two Prabha canvasses. They are gorgeous in tone and tenor. They celebrate the beauty of simplicity and the hues of humility. These tall slim figures exude a grace and aura rarely seen. Prabha studied the human figure in its manifestations of gaze and gesture, perfection and poise. Women standing, fishing, talking sitting and doing different chores, all of them inhabited her canvasses.

In art history, the human figure has had the longest tenure in different ways and through different periods. As a subject it is most enduring and endearing because it always addresses the human condition. It has always had universal appeal.  In early societies its significance was supernatural, a rendering of gods or spirits in human form. Later, it reflected the  dominant social belief system, but art’s obsession with the figure unveiled in later years an increasingly humanist outlook, with mankind at the centre of the universe.

Both these canvases celebrate the power and prowess of the human figure to stand on its own for intensity and impact. For centuries, depictions of the human figure were prized more highly than those of still-life, animals or landscape, and from the Renaissance onward anatomy became a staple of the artist’s training. Prabha smoothens contours and creates a modernist mould of the human figure in her women. Always dressed in modest Indian attire, these women are the exemplification of style and panache. Their blouses, sometimes tied in an erotic knot at the centre or just plain always draw our attention. Their odhinins draped gracefully flowing from their heads have their own feel and feature. Charisma and charm both exude from her canvasses, no matter which year they were executed.

Prabha’s first canvas (1962) at the Pundoles Sale has strokes created in the drawing format, her figures of women created in an elegant, formal style that remains her trademark. In this work, we see a number of women doing different chores. Her paintings covered a wide range of subjects, from landscapes to social issues and moments of conversation between fisher folk and village women. A significant component of Prabha’s body of work was the artist’s self-conscious attempt to immortalise the plight of women in India a subset statement on oppression against women and indifference to their woes. The adivasis, the fisher folk, the water bearers, the musicians women of all stances belonged to her canvas.

The second canvas (1976)  of a pair of women surrounded by brown mud pots is a surreal statement created in a sunset sienna and ochre-toned perfection. The mud pots that lie empty provide their own testimony to time. The empty mud pots echo drought conditions in the deserts of Rajasthan. The two women present an allure of sheer naive pathos and pain and a rare untouched beauty. Compositional control and a choreography of setting were the fulcrum of Prabha’s creative surge. The women for her were more than mere subjects of repose and reverie, they were emblems of empathy and elegance. They echoed the subliminal insignia of India’s villages as it found its place in the world after Independence.