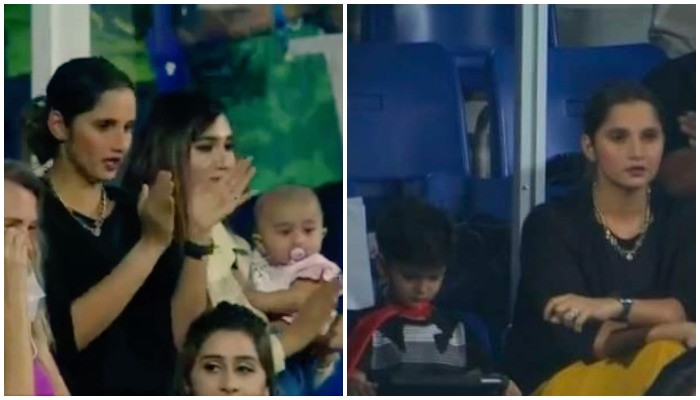 
Indian tennis star Sania Mirza on Sunday attended Pakistan vs Scotland match in Sharjah to root for her hubby, Shoaib Malik, who hit the fastest 50 in the history of Pakistan’s Men’s T20.

Pakistan decided to bat first and had scored 112 runs at the loss of three wickets when Shoaib Malik came to bat. The all-rounder batsman scored the fastest 50 off just 18 balls to set a new record for himself.

He broke the previous record of Pakistani women cricket player Nida Dar, who scored Pakistan’s fastest 50 off 20 balls against South Africa in 2019.

Shoaib’s performance was exceptionally phenomenal in the last 2 overs as he propelled his team to a 189-run total against Scotland at the Sharjah Cricket Stadium.

He hit one 4 and six 6s throughout the match.

And every time he hit a six, wife Sania Mizra, along with son Izhaan Mirza-Malk, rooted for the batter enthusiastically.

Screenshots of Sania cheering for Shoaib went viral on Twitter as users started giving credit to the star wifey for being a “lucky charm” for him.

‘Sania Mirza only Indian to go to semi-finals’

‘Behind every successful man is a woman’

‘Petition to have Sania Mirza in every match’