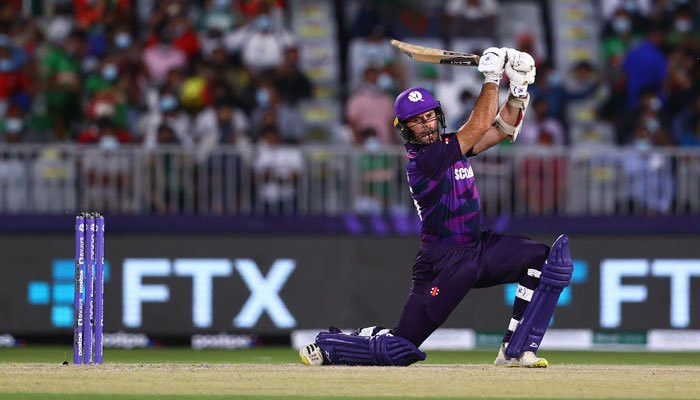 
MUSCAT, OMAN: Scotland have beaten team Bangladesh with six runs in the second match of the first round of the T20 World Cup.

Scotland had given Bangladesh a target of 141 runs to win but the latter could only score 134 for 7 wickets at the end of the 20 overs of the second innings.

Bowler Chris Greaves was given the “Man of the Match”.

Brad Wheal picked up the wickets of Nurul Hasan and Mahmud Ullah to leave Scotland in the ascendancy. While Mark Watt got his first wicket of the match by sending Afif Hossain back to the pavilion after scoring 18 runs.

At the beginning of the match, the captain of the Bangladesh cricket team, Mahmudullah, won the toss and opted to bowl first.

Half of Scotland’s team returned to the pavilion for 52 runs, after which Chris Greaves and Mark Watt batted responsibly to take the team’s score to 140 runs.

Prior to the match, Bangladesh skipper Mahmudullah had said: “This is a good wicket and more runs can be scored here, but we want to chase the target because of the dew at night.”

On the other hand, Scottish captain Kyle Kotzer said: “We are happy to bat first. If you give a good target, you can put more pressure in the second innings. There is dew but we have to deal with it.”

It should be recalled that earlier in the day, in the opening match of the T20 World Cup, host Oman had defeated Papua New Guinea by 10 wickets.