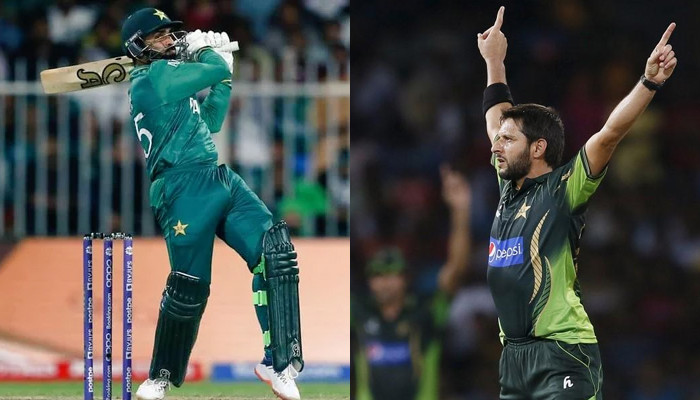 
Former Pakistan skipper heaped praise on the national squad’s hard-hitting batsman, Asif Ali, for his late blitz in the match against Afghanistan on Friday.

The former skipper was with his family at the Dubai International Cricket Stadium to watch Pakistan’s match against Afghanistan.

Asif Ali emerged as a hero for Pakistan for the second straight game in T20 World Cup 2021 as he hit four sixes in the penultimate over of a successful run chase against Afghanistan.

As Shahid Afridi made his way out of the stadium, a person asked him whether he felt like he was standing on the crease in place of Asif Ali.

At this, Shahid Afridi said: “He played better than me.”

Asif finished with 25 off just seven balls with four sixes and a single, leaving Janat and all the other Afghan players frustrated.

‘Asif Ali is a true finisher’

Pakistan skipper Babar Azam was all praises for Asif Ali too after his enthralling performance.

“I was very confident Asif would get us out of any trouble we find ourselves in,” Babar said, whose team tops Group 2 with six points in three matches.

“Asif’s hitting was clean, and that’s why we selected him. He is a true finisher.”

“We didn’t start really well, but the total on the board was decent but maybe not enough, only because of Asif,” Nabi said.

With additional input from AFP