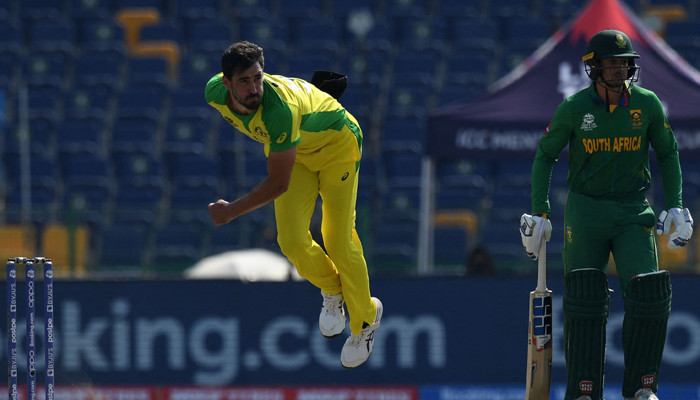 
ABU DHABI: An unbeaten stand of 40 by Marcus Stoinis and Matthew Wade saw Australia to a five wicket win over South Africa in the opening match of the Super 12s of the Twenty20 World Cup on Saturday.

Chasing 119 for victory, Australia were in trouble at 81-5 but Stoinis (24) and Wade (15) steered them home with two balls to spare in Abu Dhabi.

South Africa lost their top three batsmen, including skipper Temba Bavuma, with the score on 23 after being invited to bat first in Abu Dhabi.

Glenn Maxwell, an off spinner who shared the new ball with Starc, bowled Bavuma for 12 and Hazlewood struck twice in his first two overs and finished with figures of 2-19 from his four.

Number four Aiden Markram played a lone hand with his 40 off 36 deliveries before falling to Mitchell Starc.

Markram kept losing partners with Heinrich Klaasen and David Miller departing for 13 and 16.

Leg spinner Adam Zampa struck twice in one over and a big mid-pitch mix up led to Keshav Maharaj being run out for nought.

Kagiso Rabada hit a an unbeaten cameo of 20 off 23 balls to take the Proteas past 100 and give the team attack something to bowl at.