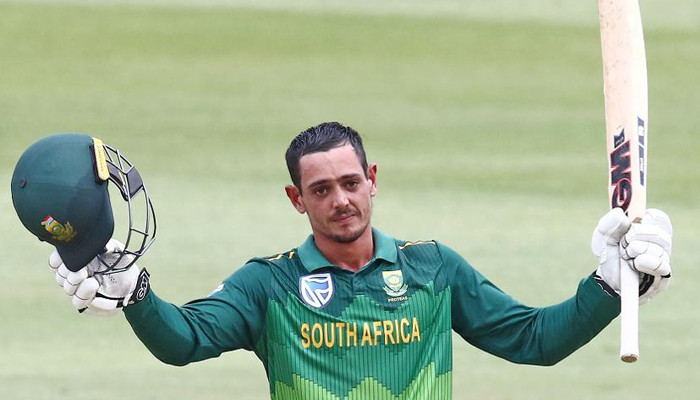 The gesture is symbolic of support for a global movement in opposition to racism in sport.

Skipper Temba Bavuma said the wicketkeeper-batsman, a former national captain, had made himself unavailable due to “personal reasons” in their crucial Super 12 match in Dubai.

The decision raised eyebrows as de Kock, 28, had previously refused to take part in the anti-racism gesture that has become a regular feature at most sporting events.

“The Cricket South Africa (CSA) Board on Monday evening unanimously agreed to issue a directive requiring all Proteas players to adopt a consistent and united stance against racism by ‘taking the knee’ prior to the start of their remaining World Cup matches,” said a CSA statement.

“Concerns were raised that the different postures taken by team members in support of the BLM (Black Lives Matter) initiative created an unintended perception of disparity or lack of support for the initiative.

“After considering all relevant issues, including the position of the players, the board felt that it was imperative for the team to be seen taking a united and consistent stand against racism, especially given SA’s history.”

De Kock refused to take a knee in South Africa’s Test series in the West Indies earlier this year.

Meanwhile, South Africa cricket chiefs said Tuesday they had noted “the personal decision” of Quinton de Kock not to take the knee at the World Cup.

However, they insisted “all players are expected to follow the directive (to take the knee) for the remaining games of the World Cup”.

“The Board will await a further report from team management before deciding on the next steps,” said a CSA statement.

“My reason? I’ll keep it to myself. It’s my own, personal opinion,” de Kock said while commenting on the matter.

“It’s everyone’s decision. No one’s forced to do anything, not in life. That’s the way I see things.”

Eoin Morgan’s England took the knee along with the West Indies on day one of the ongoing World Cup and India and Pakistan followed in their key clash on Sunday.

The South Africans playing in Tuesday’s game took the knee before the start of the game.

“A commitment to overcoming racism is the glue that should unite, bind and strengthen us,” CSA board chairperson Lawson Naidoo said.

“Race should not be manipulated to amplify our weaknesses. Diversity can and should find expression in many facets of our daily lives, but not when it comes to taking a stand against racism.”

The statement further added, “Cricket is the second most watched sport globally and the ICC Men’s T20 World Cup, being held in the UAE and Oman, is the ideal platform for the Proteas to highlight the national resolve to heal the divisions of the past.”

He has made over 10,000 international runs and was briefly captain of the Test side before stepping down earlier this year.

When South Africa played the West Indies in St Lucia in June, only six of the 11 players in the starting line-up took a knee.

Others, including captain Dean Elgar, stood with right fists raised. De Kock stood with his hands behind his back.

However, black fast bowler Lungi Ngidi, who played in that game, insisted the team remained united.

“It’s not fair for me to speak for other people, everyone’s entitled to their own choices in life. I’ve been very clear on my stance,” he said.

“In terms of the team, there is no division at all. We play for South Africa which is all we are trying to do as players.”

Nkwe’s resignation came against a backdrop of widespread criticism of Boucher following revelations made at hearings into racism in South African cricket.

The criticism intensified when black former players alleged they were not made to feel welcome in the national team environment during the period in which Boucher was a prominent member of the team.

Boucher later apologised for “any offensive conduct, real or perceived” brought to light during hearings.