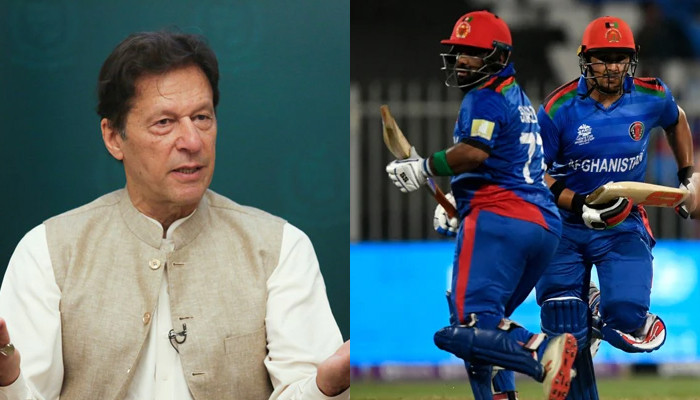 
Prime Minister Imran Khan on Monday applauded the Afghanistan cricket team for their 130-run victory against Scotland in their opening Super 12s match of the Twenty20 World Cup.

The premier, taking to Twitter, wrote: “Congratulations to the Afghanistan cricket team on their convincing win against Scotland.”

“Despite all the trials and tribulations their country is going through, the Afghan team showed great strength & determination to play and win,” the prime minister added.

Chasing a daunting 191 for victory, Scotland were bowled out for 60 in 10.2 overs with five batters dismissed for ducks in Sharjah.

Najibullah Zadran set up the win with his 34-ball 59 to guide Afghanistan to their best total of 190-4 in the tournament after they elected to bat first.

Mujeeb remained the hero with his three wickets in one over, including two in successive deliveries, to decimate Scotland’s top and middle order.

Scotland, who made the Super 12s of this event for the first time after they won all three matches in the qualifiers, could never recover after Calum MacLeod, Richie Berrington and Matthew Cross fell without scoring, and the team crashed to their lowest T20 total.

After the Taliban retook control of Afghanistan in August, the cricket team briefly faced the possibility of being banned from the tournament if the women’s game was discontinued.

Afghanistan are only a second-tier ‘associate nation’ but their strength in T20 allowed them to qualify directly for the main group stage while full Test nations Bangladesh and Sri Lanka had to battle through the first round.

In June, PM Imran Khan had appreciated the Afghan cricket team for the progress they had made despite all challenges.

The premier’s remarks came during a Q&A with a delegation of Pak-Afghan Youth Forum (PAYF), which called on him at the PM Office.

To a question about the promotion of sports in Afghanistan, especially cricket, PM Imran Khan said that no country in the history of cricket but Afghanistan had achieved so much progress in a short period of time.

“The position at which Afghanistan stands at the moment in cricket was realised by other countries in 70 years,” he said.

During his maiden Kabul visit in November 2020, the prime minister had invited the Afghan cricket team to visit Pakistan.

He was also presented a signed bat by the Afghan cricketers.

In an interview with Al Jazeera earlier this month, Afghanistan Cricket Board (ACB) Chairman Azizullah Fazli had said the team was preparing for the T20 World Cup for the last two months, even after the group took over Kabul.

“They said they support cricket and are fully behind the development of the game,” he said, adding the Taliban had assured him there would be “no political interference” in cricket and other sports.