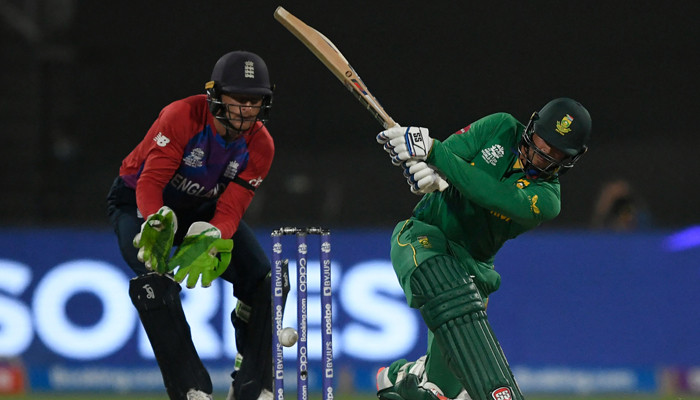 
SHARJAH: Rassie van der Dussen smashed an unbeaten 94 to steer South Africa to 189 for two against England in their bid to seal a semi-final spot in the Twenty20 World Cup on Saturday.

South Africa need to restrict England to 131 or fewer in this Super 12 contest in Sharjah to improve their run-rate and edge out Australia who thrashed West Indies by eight wickets in the first match of the day.

Van der Dussen and Aiden Markram, who hit 52 off 25 balls, put on an attacking unbeaten partnership of 103 for the third wicket to give their team a challenging total.

England, who have all but booked their place in the semi-final with four wins in as many games, elected to field first and Moeen Ali struck early after he bowled Reeza Hendricks for two.

Quinton de Kock and Van der Dussen rebuilt the innings with their second-wicket stand of 71.

Adil Rashid broke the stand as he sent back De Kock out for 34 with his leg spin.

But Van der Dussen stood firm and mixed the right dose of caution and aggression to reach his half-century in 37 balls.

He then combined with Markram to take the assault to the opposition bowlers as he attacked Chris Woakes in his fourth over – the 16th of the innings, hitting three sixes between them as 21 runs were added to the Proteas total.

Markram reached his fifty off 24 balls with a six off Chris Jordan as he hit two fours and four sixes.