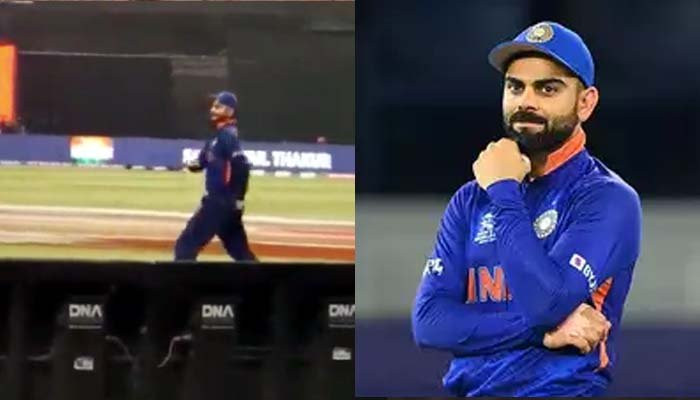 Watch Kohli’s dance step on ‘My Name is Lakhan’


India finally breathed a sigh of relief Wednesday when the Men in Blue achieved their first victory in the T20 World Cup. The team’s skipper, Virat Kohli, was so happy that he performed a dance step in the ground, that has gone viral on the internet.

In the video, Kohli can be seen walking towards the boundary line as the popular Bollywood song “My Name is Lakhan” blares from the speakers.

Almost all of a sudden, the Indian skipper gestured towards the crowd and performed the dance step.

The crowd roared in response, happy to see Kohli perform the move.

This is not the first time that the Indian skipper’s dance moves have gone viral on the internet. Earlier in the 2016 T20 World Cup as well, Kohli showed off his dance moves on the song “Gallan Goodiyan”.

India thumped Afghanistan by 66 runs in their T20 World Cup clash to keep their hopes of qualifying for the semi-finals alive.

Opening batsman Rohit Sharma hit a blistering 74 to set up India’s first win at the Twenty20 World Cup with a 66-run drubbing of Afghanistan on Wednesday as Virat Kohli’s team avoided a shock early exit.

The Indian batting finally fired with Sharma and KL Rahul, who made 69, putting on 140 for the opening wicket to guide India to 210 for two in their must-win Super 12 game in Abu Dhabi.

The tournament’s highest total proved too much for Afghanistan who finished on 144-7 in 20 overs.

They still remain in the hunt for the semi-finals along with New Zealand and India. Pakistan have already secured their place in the last four from the group.

India, who came in as hot favourites but crashed to two straight losses, needed to win their remaining three games and depend on others for their entry in the semis.