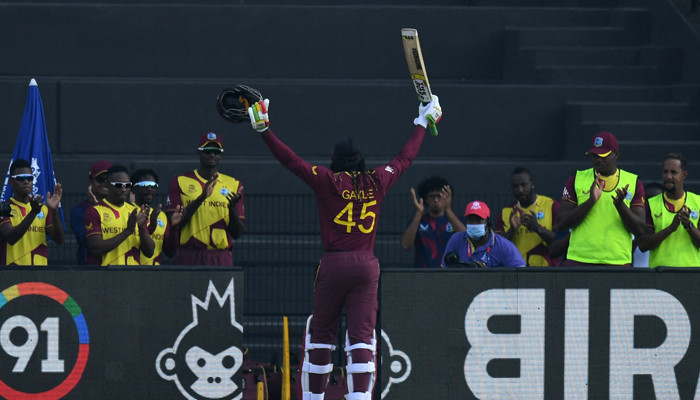 
ABU DHABI: West Indies great Chris Gayle on Saturday made 15 off nine balls against Australia in the Twenty20 World Cup in what was likely his final innings in national colours.

The 42-year-old Gayle smashed two sixes before chopping a delivery from Pat Cummins on to his stumps as he walked back with his bat raised and a standing ovation from his players in Abu Dhabi.

The self-styled “universe boss” has not yet announced his retirement but it is unlikely that he will play for the West Indies who have failed to defend their title this edition.

Gayle, a left-hand batsman who can bowl off spin, has amassed over 12,000 runs including 27 centuries in white-ball cricket since he made his debut in a one-day international in 1999.

Meanwhile, former West Indies captain Dwayne Bravo confirmed he will retire from international cricket after the conclusion of the West Indies’ bid for the T20 World Cup.

The West Indies have lost three of their first four matches of the ICC T20 World Cup and hence, can no longer qualify for the semi-finals.

However, skipper Keiron Pollard has said he does not plan on retiring from cricket after the Caribbean side lost to Sri Lanka a day earlier.

Meanwhile, speaking about his retirement, Bravo said: “I think the time has come.”

“I’ve had a very good career. To represent the West Indies for 18 years, had some ups and downs, but as I look back at it I’m very grateful to represent the region and the Caribbean people for so long.

“To win three ICC trophies, two with my captain [Daren Sammy] on the left here. One thing I am proud about is that the era of cricketers we had we were able to make a name for ourselves on the global stage and not only do that but have silverware to show for it,” he said.